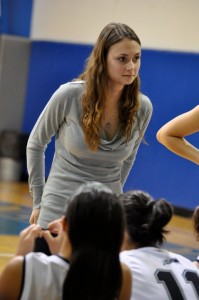 Caitlin Langford is both a Riverside and JABOG alumni. She played for her father and was an original “Bog” when the club started in 1996. Caitlin has been coaching in Port Coquitlam since 2003, in her first year of university. Following in her father’s footsteps Caitlin has coached for all ages with JABOGS as well as for Riverside. Now a teacher at Riverside, her main role with the school basketball program has been to run the Jr. Girls team, however she has been supporting the Sr. program with Paul. In all but one season at Riverside Caitlin has been involved with coaching teams that participated in the BC Provincial Championships, with several top five finishes. Caitlin has also coached numerous teams for basketball BC over the years, including very successful U14 and U15 regional and summer games teams.